“It’s hard to imagine a world without Marlene.”

To have been considered one of Marlene Bohr’s close friends has been a badge of honor I’ve proudly worn for several years. Marlene knew everybody, but she was selective about the people she let get close to her. In fact, it was at the urging of another dear mutual friend that I first connected with the small-framed spitfire Marlene was.

I indirectly knew of Marlene from the frequent encounters we had covering some of the same events in the area. At the time, she was editor at The Bee in Daingerfield and I had just started the paper in 2013. I was immediately struck by how news savvy she was. A seasoned journalist can spot the fakes a mile away. Trust me. Marlene KNEW what she was doing. She may not have had a journalism degree hanging on the wall, but she had learned, no, mastered, the art of good journalistic writing. On those many occasions when we would find ourselves in the same room at an event, we would always exchange pleasantries and each scurry along to get quotes from whomever and pictures of whatever we were covering.  And as if planned, our stories, in two different publications, would often mirror the other the following week.

That cordial dance with Marlene went on for almost a year until one day I got a call from the now late, great Arthur L. Bruce. She told me I needed to give her good friend Marlene Bohr a call. And if you knew Mrs. Bruce, you didn’t ask any further questions. You just did as instructed. That call was in late August 2014. Marlene explained to me that she had decided to leave the Bee, but she wasn’t quite ready to put the pen down (despite the fact that she was now comfortably in her 70s!). Arthur Bruce instinctively knew we would be good for each other.  Marlene needed to still feel needed and I just plain needed the help.

My prayers had truly been answered. My weakness, early on, had been providing adequate news coverage in Morris County. That problem was immediately solved with Marlene’s first story byline. And before I knew it, she had convinced me that The Tri-County Press needed to expand to Hughes Springs and Avinger despite the fact that we already covered three counties–Titus, Camp and Morris. I learned quickly not to argue with Marlene.

When it came to writing, Marlene had several secret weapons. She was, hands down, the Shorthand Queen of the South. She could take some of the most infallible notes at all kinds of meetings and events.  I write fast, but Marlene could have a story almost written before I finished the first draft.

She also had a hunger for hard news and understood that the AP stylebook was created for a reason. Sometimes, when we were still in print weekly, she would send me more stories than I had space for. We would laugh about the fact that I really needed two papers: one for my stories and Part 1 of her stories. The other paper would strictly be for the second half of hers!

But if there was anything, I coveted the most about Marlene, it would have to be that Rolodex of contacts in her phone. Her list would put the Yellow Pages to shame. She had every governmental official this side of the Mason-Dixon in that phone. There wasn’t a state trooper, sheriff or county judge in these parts that she didn’t have their personal cell number.  And, in a pinch even after hours, she wasn’t afraid to call them.

Marlene also had an affinity for furry, four-legged friends. Her dog Sibby put up with me whenever I stopped to visit Marlene, but I knew that Sibby knew that me stopping by meant I was taking precious time away from Marlene spoiling her.  Basically, Sibby tolerated me.

An Illinois transplant, Marlene loved her family back home and loved preserving the rich history of her ancestors. Actually, it was usually around this time each year (just before her birthday) that she would load up one of her Camrys and make the one way, 800+ miles pilgrimage back home to visit. She was often solo if you didn’t count Sibby as a human in the back seat, Marlene always counted Sibby as a human.

When she wasn’t going clear across the country, you could find her setting up at a local flea market. I never could understand how a person so small could load a van full of merchandise and go sell everywhere in Northeast Texas weekend after weekend.  When she wasn’t stocking up on sale-priced Tic Tacs and jelly beans, she might be found restocking the bird feeder in her backyard or heading out the door to her weekly Lions Club meeting. And if it wasn’t her day to do all of that, she often doubled as a Secret Shopper (I just revealed one of her secrets!) at some local eating establishment or store in between stopping to get her daily dose of Diet Coke (coupon in tow) at Sonic.

So earlier on in 2019 when she became ill, I kept expecting her to “bounce back.”  Never one to slow down, I just never imagined, despite her age, that she wouldn’t get better eventually. Watching my friend suffer, after being so active for so many years, was tough.

I last laid eyes on Marlene just a few days before she died. She called and asked me to take her to the doctor. Several times before, I had been unable to do so so I was happy to oblige this time. And although frail, she still struck me as a woman with few regrets. We spent a full day together–something we hadn’t been able to do in quite a while. In what would be her last days on this side of glory, Marlene wanted two final things: to be back home and to have Sibby back home with her. She was able to do both, so I can’t help but think Marlene figured her final story was now complete.

I can only imagine the cutlines and headlines Marlene must now be writing as managing editor of The Heavenly Herald.

Be sure to save a story for me, my friend. It’s been more than a year now, but I still dearly miss you. 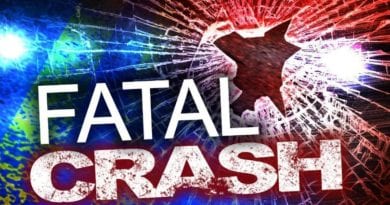